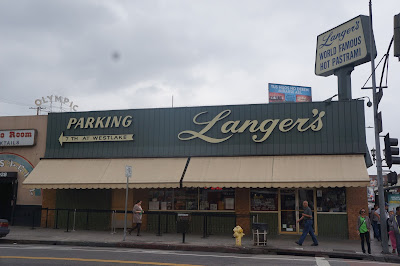 There are days when I have cravings (I guess it's pretty much everyday for a girl like me). Some of these cravings involve a warm, juicy pastrami sandwich doused with a rich, creamy dressing on rye bread. Depression kicks in when I can't satisfy these cravings. Luckily, my fellow Angelenos and I are blessed with a delicatessen that offers one of the best pastrami sandwiches in the nation.

Langer's Deli is a landmark. Founded in 1947, the establishment has earned a James Beard Foundation award and is family-owned. Norm Langer, who worked under his father Al when the deli had only 12 seats, now runs the place. On occasion, you can catch him wandering through the restaurant making sure things are running smoothly.

The décor is retro. As soon as you enter, you know you've stepped foot into an historical institution. It seems like nothing has really changed. "It has character," as I would say.


The menu is extensive with various items to choose from. What are they known for? Well, the majority of the sandwiches are good and don't forget the milkshakes. The bread? Well, Langer's obtains the rye from the local bakery Fred's. But seriously, all you need to know is the number 19. It's legendary at Langer's.

Overall, you can't go wrong with Langer's for a good ol' pastrami sandwich. The service is great and the staff are knowledgeable. What get's me hyped up about this place (other than the delicious pastrami) is the rye bread. It's baked and then doubled baked to get a crisp crust. Everything is delicious and the weight on the number 19 amazes me (I could probably do lifts with a couple of those).  The only downfall about Langer's is the fact that they close at 4pm. So when it's late, and you're feeling the munchies around midnight, you're out of luck. You could only stand at the door and cry in your own misery for not having had ordered a number 19 to go the day before. Word of advice: Parking can get a bit difficult and you might get lucky with street parking.