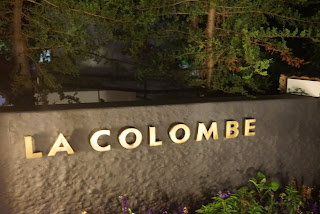 Have you ever visited a place and wondered why one restaurant is far more exceptional than the others? What exactly makes the restaurant the best restaurant in the city? I contemplated these questions as I arrived in Cape Town. I've traveled the world and eaten at a number of three-michelin star restaurants (including Osteria Francescana in Modena, Italy) and La Colombe has been consistently ranked the best restaurant in Cape Town. I managed to snag a reservation for my last night in South Africa. I simply wondered if it lived up to the hype.

Nestled in a beautiful winery in Constantia, La Colombe sits at the top of the Silvermist estate. It's about a half hour drive from the city on a good day. The views are simply spectacular and you're transported into a world where you are just one with the food.

As you ascend into the restaurant, you're greeted with a vast array of delicious amuse bouche to make you want more. You anticipate that the meal will be exceptional upon the first bite. The warm, freshly made sourdough bread complemented with the spiced pork lard simply melted in your mouth. I was looking forward to the meal. I decided on the gourmand, which is their elaborate tasting menu.


Chefs James Gaag and Scot Kirton managed to construct a menu that was well thought out to bring out the flavors of every ingredient. Everything from the tuna served in a tin can to the dessert consisting of a moist sponge cake of pineapple was simply put: an orgasm in my mouth. The chefs managed to permeate flavors that were surreal. The meal from start to finish was an experience that truly was unforgettable. This is essentially why La Colombe is awarded as the best restaurant in Cape Town; the restaurant does live up to its hype. The service was on point, from filling the water when necessary to timing the food perfectly. The ambiance, though could be a bit noisy at times, was clean and sophisticated. The only thing left standing is the necessity for the Michelin guide to credit this restaurant it truly deserves.