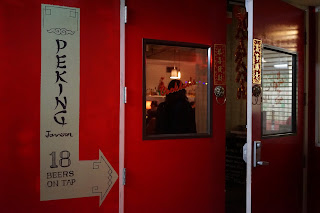 In the basement of a bank in downtown Los Angeles sits a Chinese gastropub. Peking Tavern serves street food that would be commonly seen in Beijing, hence the name Peking.

Upon going down the stairs, you are greeted by the hostess. We were led to a table in the near empty dining room. There was communal seating in the middle of the room, which many people were flocking to as well as the bar area. The ambiance was very cool and bar-like but with a hint of Asian inspiration (minus the Kobe Bryant mural). I did appreciate that they seemed to be all about LA; however, I was disappointed with the service. It took them 15 minutes to take our order and a good amount of time to get our food. Most of the time spent at the restaurant was waiting and not eating.


Overall, I thought Peking Tavern was just ok. I was mostly turned off by the wait time and the service. It seemed as though only two people were working the dining room for a Saturday night. Additionally, the food was good, but it didn't blow my mind. I did enjoy the potstickers and the drink. If they could improve on the service and improve on the other dishes, then maybe this place could be a hit. 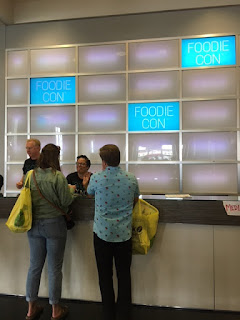 Foodie Con is an event supposedly made for foodies. I thought I would step into heaven when I arrived, but it was somewhere in between Earth and Hell. It wasn't anything I expected and it lacked the food component that I was hoping for.

At $40 for a VIP ticket (luckily I was comp'd), I was anticipating a plethora of food samples, food dishes, and everything else in between. What we actually experienced was a Farmer's Market where you have to pay to get in. There were more vendors trying to sell or market their merchandise than actual food tastings and restaurants promoting their food. Additionally, VIP didn't get you much other than a secret room with a big blow up swan and unicorn and extra seating for picture taking. Below are some pics of the event...

Overall, I would say that Foodie Con is a pass. There needs to be vast improvement in terms of vendors...ie less vendors and more restaurants/food promotion. It is called Foodie con and as the name implies, I expect more food for foodies. The beer area with beer tastings were probably the best part from the whole event, offering glasses of beer to taste. There was a silent disco was interesting, but not amazing. The only good thing was getting free ramen cups.